In the state of South Dakota, billboards rule the advertising scene. Their dominance is especially prevalent along I-90 or along any of the state’s other major thoroughfares. Highways are a prime location for a billboard when you want your advertisement to catch the gaze of as many eyes as possible. With a properly designed and excellently installed advertisement from a high-quality billboard wrap producer, you can make a lasting impression on every vehicle that passes, even those speeding by at 75-80 mph. 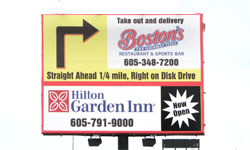 For the most part, billboards are directed to consumers in the tourism category, hence their popular application on travel routes. How will interstate travelers know where to make an impromptu stop for a quick meal at a local restaurant? Where will the majority of incoming tourists book last minute lodging as the sun begins to set over the Black Hills? For those who arrive with little familiarity for the area, the long stretches of highway are your chance to show them what your hotel, restaurant, or attraction has to offer. For those who come to the Black Hills with certain destinations in mind, an eye-catching billboard wrap by an experienced producer like Conrad’s Big “C” Signs of Rapid City is the opportunity for changing their minds. 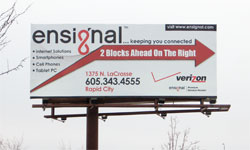 With these helpful tips for billboard wrap design, Conrad’s can get you on your way towards conceptualizing your roadside advertisement.

1.) Use bold, contrasting colors. Nothing draws attention like a good color scheme. Complimentary colors that sit at opposite arcs on the color wheel make for aesthetically pleasing combinations.

2.) Send a visual message with images. By nature, human beings respond well to visual stimulus. A brick of text just won’t do—make sure you consider shapes, textures, symbols, animations, and pictures to bring your billboard to life and elicit a positive response.

3.) Use an interesting, yet READABLE, font. Yes, “Freestyle Script” has a certain something Arial is missing. However, a curling script-like font has the potential to convolute the message. Find a happy medium between artistry and legibility. Make sure your font matches your message—elegance is appropriate for the name of a 5-star hotel and resort, while simplicity is necessary for delivering central information, such as hotel directions.

4.) Get to the point with a succinct message. Say a little…but don’t say at all. Focus on the information that’s necessary, such as the dates of the next home hockey game or the number for making restaurant reservations. A messy, overdone message in text takes too long to read—much longer than it takes to speed by your billboard on the interstate. In that case, your words could end up wasted.

When you bring your billboard ambitions to Conrad’s, our production team will help you turn ideas into reality with our own unique set of tips for billboard wrap design, manufacture, and installation. No matter the size of the job, Conrad’s Big “C” Signs of Rapid City is a local billboard wrap producer that can manufacture, restore, repaint, or wrap your roadside advertisement.